Handel in Ireland
Based on Handel’s visit to Ireland in 1741, the album contains harpsichord music by Handel, Roseingrave and Carter, plus virtuosic operatic arrangements from Handel’s ‘Rinaldo’ by William Babell. As a bonus there are two tracks of popular Irish melodies; one a favourite of Handel, and the other written in a Handel manuscript. Both the Carter Sonatina and The Poor Irish Boy are previously unrecorded. Also included is a 16pp booklet with a fascinating summary of an article written for ‘Essays in Honour of Christopher Hogwood’.
Bridget Cunningham was supported by the Worshipful Company of Musicians as a Fellow of the Royal College of Music. The Finzi Trust awarded her a research scholarship to study Early Baroque Irish Music, which led on to her recording ‘Ireland’s Enchantment’ with her group ‘Emerald Baroque’ and specifically to researching music for this CD
£14.99 plus pp available from http://www.bridgetcunningham.org.uk/­recordings.php
To hear extracts of all tracks visit http://www.cdbaby.com/­cd/­bridgetcunningham

Concord of Sweet Sounds
Sophie Yates, a specialist in playing original instruments, plays Purcell, Blow and Croft and early dance movements, on two important historic instruments at Westwood Manor, Wiltshire. A very early and important Italian ottavina virginal, 1537 by Mutinensis and a Stephen Keene spinet of 1711. The Westwood Recording Project was set up to create a recording which would bring these instruments to life and to raise sufficient funds for the necessary research and restoration. This has now been achieved. Full details of this process and of the instruments are given in the notes.
For copies of the CD, £15 plus £1.50p&p please contact emily@azis.co.uk 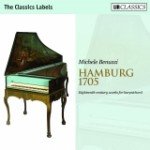 The programme combines pieces by Handel with an introduction to two less well-known but very fine contemporaries – Graupner and Mattheson. Dance movements such as the allemande and sarabande are ideally served by Michele Benuzzi’s expressive approach. The disc also features several examples of Handel’s free preludes, performed with a combination of freedom and forward energy. There is also plenty of opportunity to hear bravura playing: the impression left after the final track is one of artistic power and splendour. The instrument is the glorious original Dulcken harpsichord of c 1740 in the collection of Sheila Barnes. CD obtainable direct from http://www.michelebenuzzi.org.uk/­06_discography.htm or from LIR Classics – http://www.london-independent.co.uk/­LIR021.htm

F. Couperin, d’Anglebert, Marais and Rameau
Luckily not all French harpsichords ended up as firewood during and after the French Revolution! A survivor at Versailles, a Ioannes Ruckers of 1628, underwent a petit ravalement in 1706 , probably carried out in the Blanchet workshop. The original 1628 Ruckers was a large double-manual with chromatic bass, allowing for a less violent ravalement than was usual. The 1706 instrument thus retained much of its original voice: richness of overtones, sonority and clarity, expressiveness and vitality. Qualities magnificently captured by the Swedish builder Andreas Kilström, whom Ludmila commissioned to build a “Versailles Ruckers”. This superb-sounding instrument inspired her to record music of the period, including Rameau’s Suite in a minor published the same year as the ravalement in 1706.
For details on how you can order this CD, please mail: Ludmilla.Tschakalova@telenet.be