A round-up of recent recordings by BHS members. 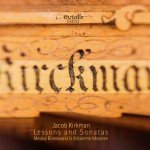 Medea Bindewald (harpsichord, square piano),
with Nicolette Moonen (violin)
This recording features the nearly forgotten composer Jacob Kirkman (1746–1812), a nephew of the famous London harpsichord maker of the same name. His delightful lessons and sonatas are representative of the musical taste in post-Handelian London. Medea Bindewald plays a 1756 double manual harpsichord by the composer’s uncle Jacob Kirckman and a 1795 square piano by Broadwood & Son, both from the Finchcocks Collection in Kent, England. The variety of different sounds presented on this CD is enhanced by including Kirkman’s works written in the unique and nowadays much-neglected genre of keyboard repertoire with a violin accompaniment, played here by Nicolette Moonen. This is one of the very last recordings made at Finchcocks Musical Museum before its closure in 2016.
To order the CD or listen to a sound sample: https://hyphenpress.co.uk/products/music/jabob_kirkman 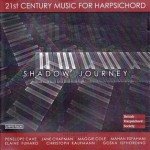 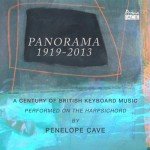 A Century of British Keyboard Music,
performed on the harpsichord by PENELOPE CAVE
Like the patchwork of fields seen from a plane, the British repertoire within this recording, played by Penelope Cave on the harpsichord, offers an overview of the landscape of what is sometimes referred to as music of the early keyboard revival. The individual pieces are mostly miniatures that draw, to varying degrees, on the vast body of past keyboard repertoire, and yet celebrate the harpsichord as a relevant, modern instrument. Panorama, the title of the final piece of the CD, also describes these aerial snapshots from each decade from 1919 to 2013.
Inevitably, in writing for the harpsichord or clavichord, composers look back from their own standpoint of the present, applying their knowledge, experience and imagination to the task of invigorating a compositional fusion of current international styles with tropes of the past. Many of the short pieces on this CD may only have been intended to supply a taste of a quaint instrument, or a glimpse of a bygone age; some are now historic, themselves, and ready to be re-evaluated or re-marginalised.
This recording is dedicated to a pioneer of harpsichord music of the twentieth-century, Ruth Dyson (1917-1997). The producer was Pamela Nash, who also made such an excellent job of our very own twenty-first century CD, Shadow Journey, in which Penelope Cave also contributed.   PFCD048 http://ascrecords.com/primafacie/

Jacques Duphly-Pièces de Clavecin
In 1742, the former organist Jacques Duphly settles in Paris and devotes himself exclusively to the harpsichord. He rapidly gains a reputation as one of the finest players and teachers in the city, praised for his delicate touch and graceful playing style. This CD presents a selection of character pieces and stylised dance movements. It includes his most famous pieces such as the grand Chaconne in F major and Médée, as well as the lesser known movements with violin accompaniment. In this particular genre, the violin plays a supplementary role supporting the harpsichord, which remains the lead instrument. Imitative phrases alternate with passages where the violin simply duplicates the top voice of the harpsichord. This duplication has the effect of adding a special register to the harpsichord, and there are moments when the two instruments blend so well with each other that only one instrument seems to be playing. Supported by Nicolette Moonen (violin), Medea Bindewald creates interpretations that breathe with life, revealing the vocal qualities of the harpsichord. The accompanying booklet includes an essay by the musicologist Philine Lautenschläger, photographs & a note by Keith Hill, maker of the double manual Blanchet copy.
Label Coviello Classics http://www.covielloclassics.de/­index.php/­katalog-detail/­items/­204.html
UK distributor: https://hyphenpress.co.uk/­products/­music/­jacques_duphly_pieces_de_clavecin Where you can also listen to a sound sample. 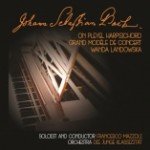 Bach on the Pleyel Harpsichord
Francesco Mazzoli writes “The instrument played during this recording is the concert harpsichord Pleyel which belonged to Irma Rogell (1918-2013), Wanda Landowska’s last pupil. This instrument was personally ordered in 1957 by the great Polish harpsichordist who played it during her last year of life. She required from the French manufacturer a particular sound, much richer and much more powerful than the concert Pleyel harpsichords produced until then. This Pleyel harpsichord has two manuals in the disposition 16’, 8’, 4’ choirs in one manual and 8’, lute and nasal in the second one, controlled by a seven negative-action pedals.
After a long oblivion, I began to restore it in 2010; it took two years to bring it back to its original sound which, as you can hear, is very rich, powerful, almost piano/organ-like because of its unique structure, considerably different from traditional French or Flemish harpsichords.”
The Brandenburg and the Harpsichord Concerto were recorded live during the inaugural concert of the restored instrument in Verona in December 2012. The two other tracks are included as a special tribute to Landowska and to show the exceptional qualities of this her favourite instrument. 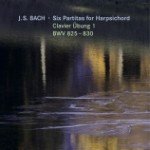 ‘Keyboard Practice consisting of Preludes, Allemandes, Courantes, Sarabandes, Gigues, Menuets, and other galanteries; prepared for the delight of spirit of music lovers by Johann Sebastian Bach… Director of Music for Leipzig.’
Bach’s Partitas have often been singled out as the greatest of suite collections, the Baroque equivalent of Beethoven’s piano Sonatas. This is true inasmuch as Bach, in such pieces as the Toccata, Sarabande and Gigue of the E minor Partita, goes far beyond the limitations of his time, in expressive explorations every bit as radical as Beethoven in his late Sonatas. They belong with the supreme achievements of western art music. From the Liner Notes by David Ledbetter
MCD1301 – DOUBLE CD EAN_7640120198695 http://www.mayarecordings.com 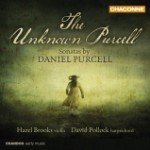 Daniel Purcell
‘The Unknown Purcell’
Sonatas by Daniel Purcell (c.1670-1717)
On this CD (CHAN 0795) can be found the premiere recording of Daniel Purcell’s surviving harpsichord music. With the exception of the preludial ‘Toccata’, the pieces are the composer’s own arrangements of various songs and dances for the theatre. David plays a double-manual harpsichord, a copy by Anne and Ian Tucker of the Ruckers/Hemsch in the Cobbe Collection at Hatchlands Park. The CD also features nine ‘Solos’ and ‘Sonatas’ for violin (Hazel Brooks) and continuo, as well as a fine Chaconne in A minor, again mostly premiere recordings. 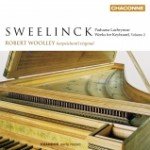 Sweelinck
Robert Woolley an internationally regarded authority on the music of this period.
On this recording, he plays two instruments: a modern copy by Malcolm Rose of the Lodewijk Theewes claviorgan of 1579, a harpsichord-organ combination which has belonged to the Victoria and Albert Museum, London since 1890; and a rarely heard virginal, or muselar, by the firm Adlam Burnett, based on an instrument of Ioannes Ruckers from 1611 in the Finchcocks collection.
‘A rich, rewarding brew of imaginative harpsichord music , expertly played…There is not much competition in the world of Sweelinck recordings, but this stands out as an excellent harpsichord release in its own right.’ Gramophone
Available direct from Chandos: http://www.chandos.net/­CD_Notes.asp?CNumber=CHAN%200758 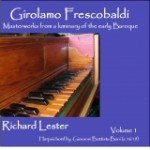 Frescobaldi; Keyboard Works, Vols 1, 2 & 3
Three volumes of Frescobaldi’s keyboard works recorded by Nimbus Records and played by Richard Lester mostly on the 1619 Boni harpsichord and instruments at Fenton House. The fourth and final volume will be released in the Spring of 2013.
“This playing has an eloquence, vitality and freshness…. The Toccatas are rooted in improvisation and it is that extemporaneous character which Lester most potently evokes in his marvellously free-flowing and coherently paced performances… This is clearly going to be a series of great musical value as well as of highly enjoyable music-making from an authoritative and compelling advocate of this music.”
Marc Rochester International Record Review
“The Toccatas make for an expressive contrast and perhaps include the finest music of all. Performance of Frescobaldi demands a free, improvisatory style of performance, of which Richard Lester is obviously a master. He plays a perfectly chosen harpsichord with a particularly attractive, warm sonority with the sound perfectly focused in an ideal acoustic.” Penguin Guide to the Finest 1000 Classical Recordings 2011

Goldberg Variations
I felt driven to record Bach’s Goldberg Variations as I was completing my book Did Bach Really Mean That? which is the result of one of the consuming interests of my life as a player: the investigation of notational conventions. The Goldberg Variations was not just an ideal medium for the exposition of some important suggestions made in the book, but a chance to put my head above the parapet, offering one of the iconic works of the Early Keyboard repertoire. Reviews have been very positive, but the most pleasing comments have come from some who have been, over the years, not just sources of inspiration, but my most severe critics. John Byrt commented “You’ve really hit the nail on the head. What comes over above all is the joy and wit of the piece.” And Colin Tilney has told me “Cross my heart, it’s the only performance of the Goldberg Variations I have ever enjoyed.”
Read reviews and buy online (Price including UK p&p £9.99) at http://www.soundboard-records.co.uk